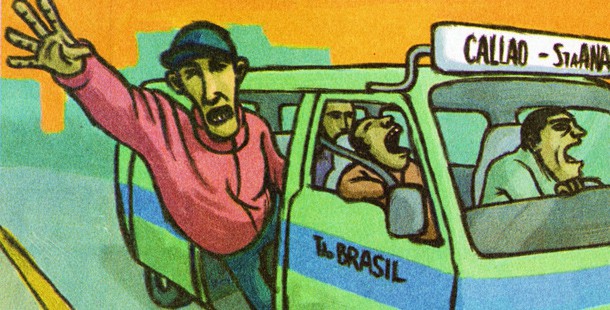 It has to be admitted that public transport in peruvian cities is very well developed. It might be even said that there are more buses and taxis than private cars. About the quality of these vehicles, well I think there are more older models, then new one, or at least looking like old. But definitely there is something what differs this Peruvian public transport from the one you can find in countries outside Peru.

It is especially worth pointing out the buses team. As a rule, there are minimum three persons: a driver, a man who is taking money for the passengers, called el cobrador and at least one passenger (because peruvians buses do not move if they do not have passengers on the board). In general, it looks like standard team, but very interesting in all of that, is the role el cobrador. Of course the driver and passengers all over the world behave similarly, because the first always drive the vehicle (well sometimes also sells tickets), and the other one, for an agreed amount of money, needs to move somewhere. But the function of el cobrador in different countries may have a slightly different look.

And in Peru the role of our  “hero” – el cobrador is quite different. But where exactly we can see the difference about peruvian’s cobrador? Well, below you will find some specific facts about cobrador in Peruvian public transport.

What does exactly do el cobrador?

For sure different are the actions taken by el cobrador. For example, when the vehicle stops at the bus stop, or often even before it, our cobrador runs out of the bus, shouting the names of streets or directions in which is going to go. Sometimes, even before going out from the bus (when the bus is still in move) first he shouts through the open window or door. Moreover, during this such a loud announcement to all and sundry where the bus is going, our cobrador additionally performs also another, some would say, unusual functions, such as: grabs the people off the street, off the sidewalks, although not only. He is also turning his eyes directly into pedestrians crossing, because there a lot of potential customers too. El cobrador in the blink of an eye is able to entrance into pedestrian crossing and ‘’recruit’’ a new clients directly to the bus. This kind of behavior is very popular for example in Lima.

Well, yet another function performed by the peruvian cobrador – more popular because associated with charging tolls. But even here, there is a curiosity. Namely, when a tourist gets on the bus, he needs to be prepared that our ‘’ticketing man’’ will charge from him a little higher toll. It turns out that the issue of the toll is in some cases, to put it mildly, ambiguous. For such the surprises I had the opportunity to encounter, among others, in Cusco. But do not worry, in the moment when you will realize that such dealings take place, tell it loud enough, bargain for a moment and then usually el cobrador will change his mind and will charge a toll, the same like from locals.

To sum up, it must be admitted that ‘’ticketing man’’ doesn’t have an easy job. He always has to be vigilant, every day run quite a lot, even more shout, and all the time he needs to count and spend money. He must also continually hurry customers to either quickly come in to such a bus, or as soon as possible went out from it. And all these activities have to be done, of course, in the blink of an eye, because time is money. And of course the competition is not small and definitely is not sleeping. If our cobrador will be too slow, for sure another bus and of course another cobrador will take the clients from under his nose. When it will happen, obviously there will be smaller profit, what of course nobody wants. Therefore good cobrador must to have some specific features, including primarily: good, loud voice; even better eyesight; agility and partially a logical mind to instantly perform in his head the right calculations.

For those of you who are planning a trip to Peru, I recommend to take, at least once, public transport. Then you will have a great opportunity to check and see how looks like a hard job of our hero el cobrador and of course you will taste some of everyday life of Peruvians. Public transportation is the perfect place to get an extra knowledge and be better acquainted with peruvian’s’ culture. And if you are talkative person, you will for sure cut one interesting chat with other customers :-). Take it as a great opportunity to learn as much as possible about culture, traditions and daily life of Peruvians. Then you will have two in one – a cheap way of getting from point A to point B and the knowledge of the country, people, culture at first hand.