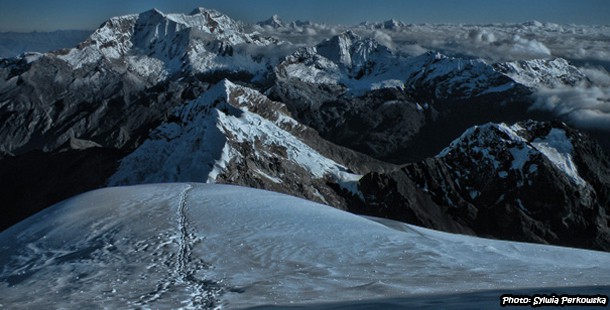 Tocllaraju mountain (6034 m.a.s.l.) is one of many peaks over 6000 m.a.s.l. in the Cordillera Blanca. But there is something that differentiates this summit from others, namely it is relatively easy to reach. Not for everyone, but for sure for all of you who can stand even around 17 hours of hiking during 24 hours, mostly in snow and who are very good acclimatized. So lets discover my impressions about climbing Tocllaraju mountain in Cordillera Blanca Peru. 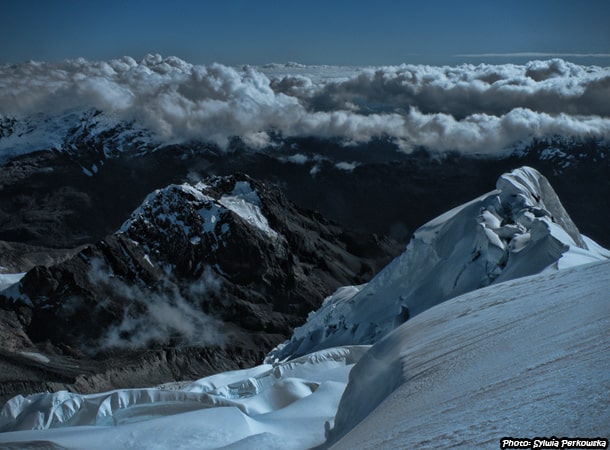 It is not difficult mountain to climb but of course it has some technical short walls to overcome. The first more difficult wall has 50-55 degrees and the other one just before the summit 50-60 degrees.

Access to Tocllaraju mountain is possible through the Ishinca Valley. I think that it is one of the most famous valleys in the Cordillera Blanca. From this valley you can climb some summits, among others Ishinca and Urus. 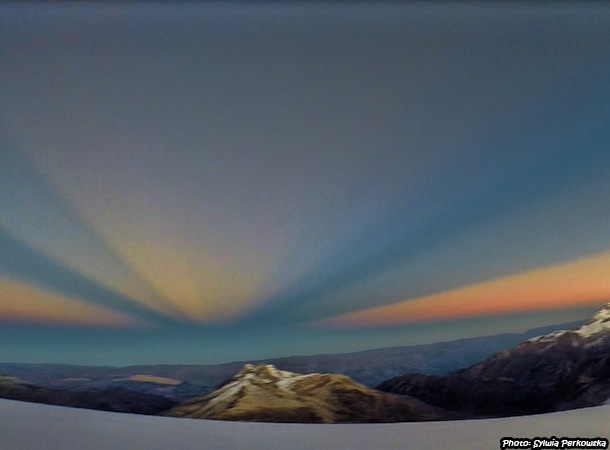 It was my second climbing adventure over 6000 m.a.s.l. The first one was in Bolivia where I climbed Huayna Potosi peak (6088 m.a.s.l.). Having already these two experiences, I have to admit that in compare to Huayna Potosi, climbing Tocllaraju was definitely much more difficult and exhausting. But of course I had also more satisfaction from the second summit, because it was much more technical than the first one and I could check myself in hard conditions.

In general climbing Tocllaraju takes 4 days. Due to several circumstances I did it in 3 days, but it was really hard. And I need to confess that the last third day was the hardest from all the adventures which I had.

How everything have started…. 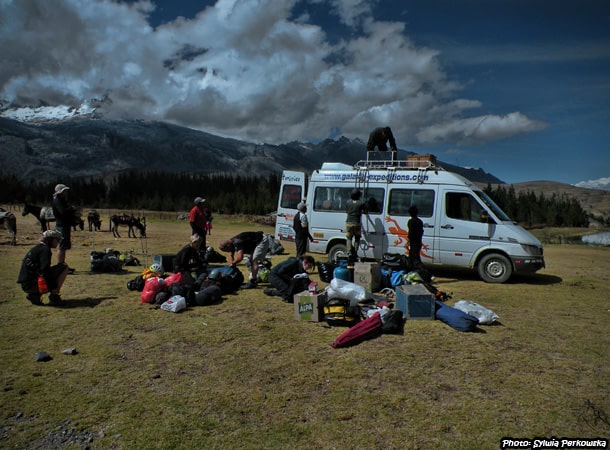 It was a very nice, easy and light trek. 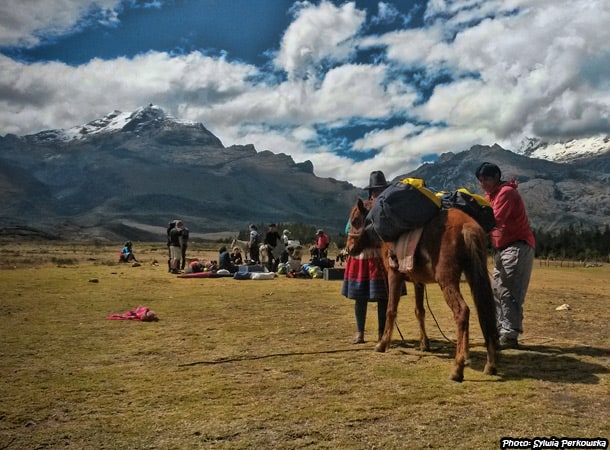 The route was mostly flat, so it was a pleasure to walk there. It took us around 6 hours to reach the first base camp (4250 m.a.s.l.) 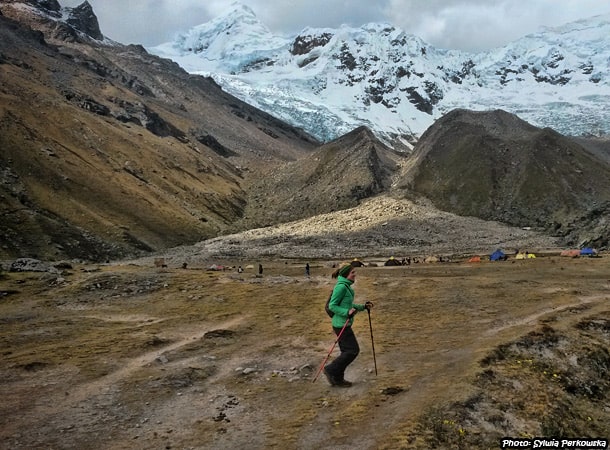 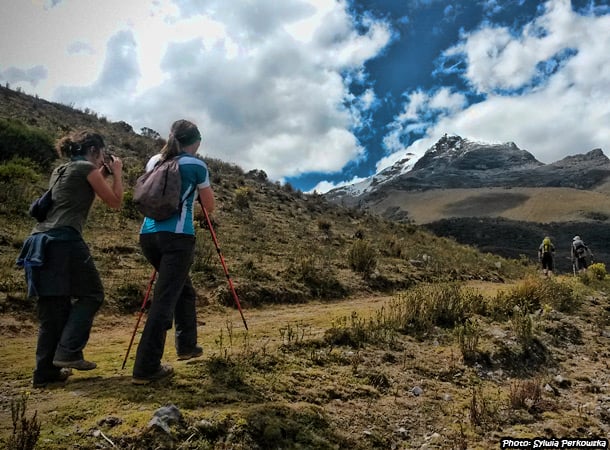 In the base camp we had nice dinner and soon after it we fell asleep. 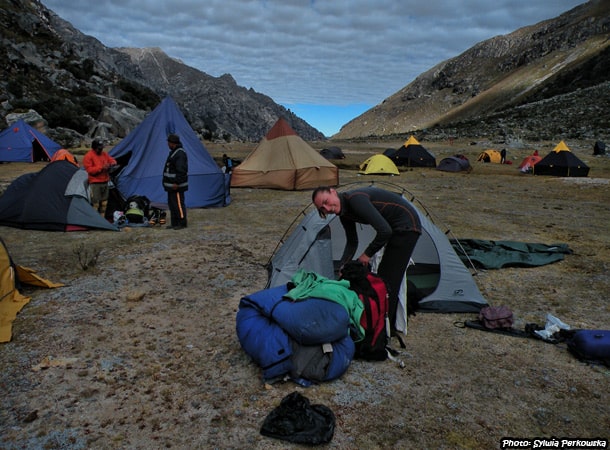 The next day we started our trekking around 9 am. This part was much harder, all the time up. 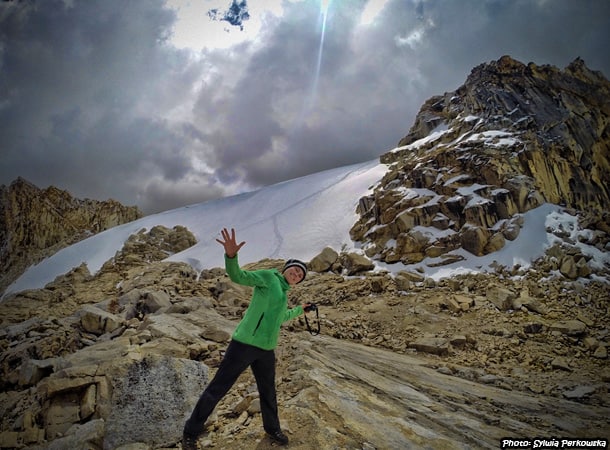 Fortunately 3 first hours of hiking I had a horse, which carried my equipment. It helped me to keep some extra energy for the night attack of the summit and definitely for the third day (my last day) which I had much longer than others, who did the tour in 4 days. 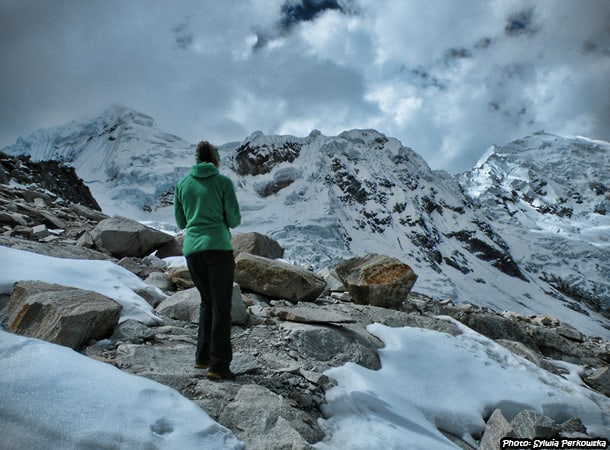 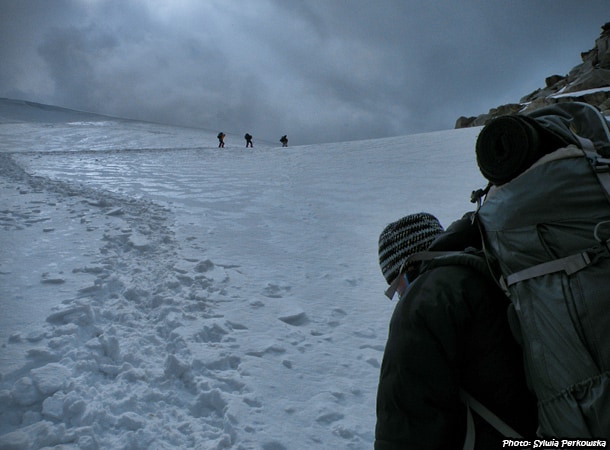 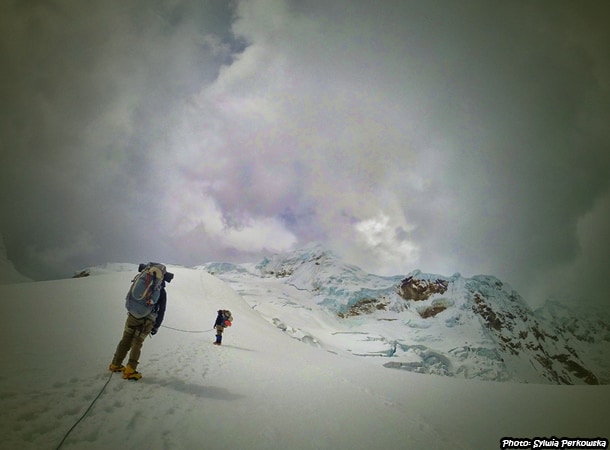 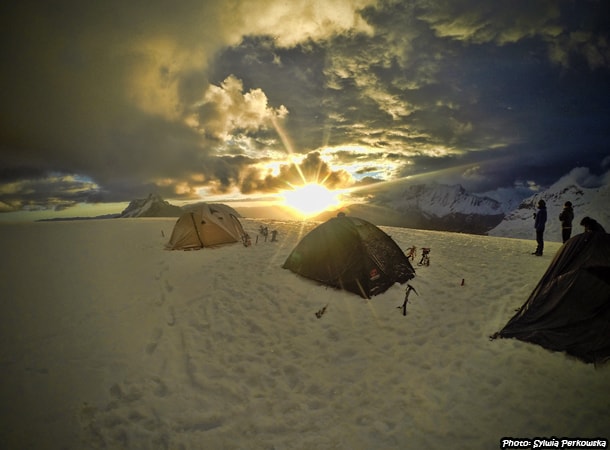 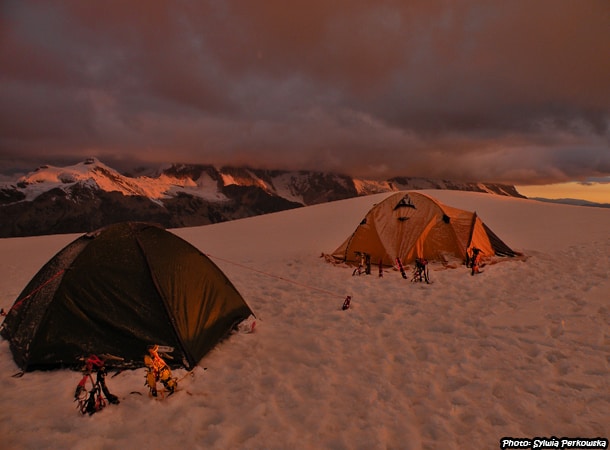 Here I had quite a big headache, so directly after unfolding the tent, I took pills to decrease the pain of my head, took some pictures and went to rest. After 3 hours I felt much better. 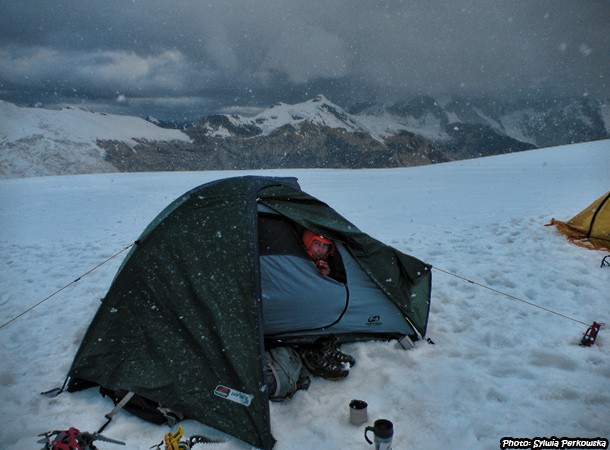 Around 1:30 am we started to attack the summit. 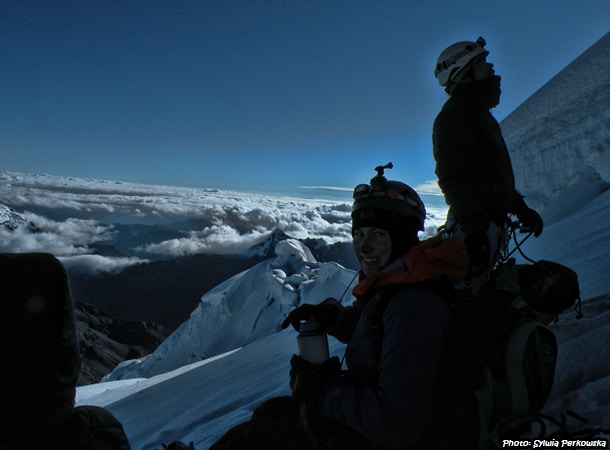 Because of the attitude we walked slowly. 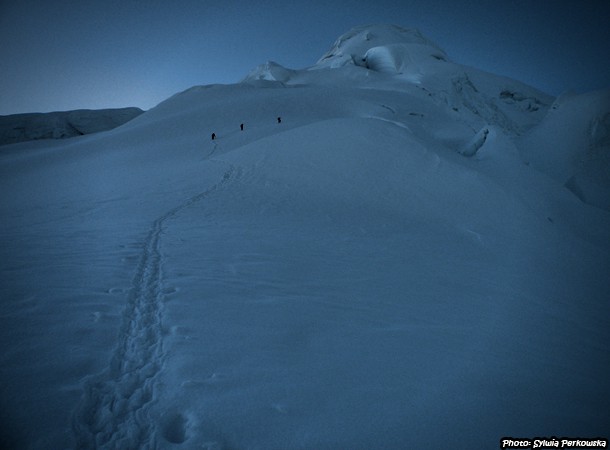 We arrived to the top around 9.30 am. So it was quite a long climbing. 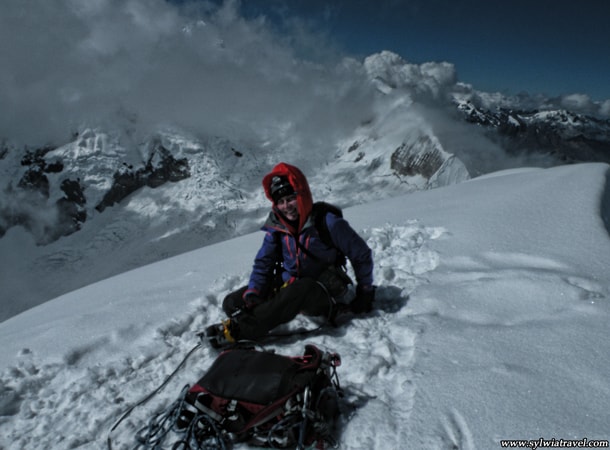 Some minutes after arriving to the top the weather started to change. So we did not have too much time to enjoy the views. 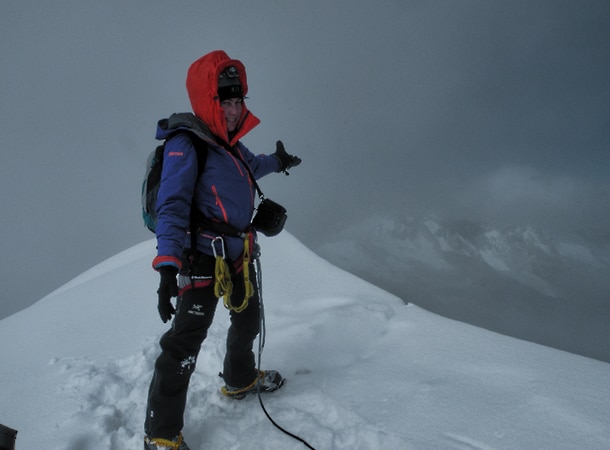 Unfortunately in the way back the weather changed a lot and we could not see anything further than to the end of my hands.

The fog made impossible for us to walk fast. Sometimes we had to even stop for 15 minutes or more and wait for the better weather conditions. 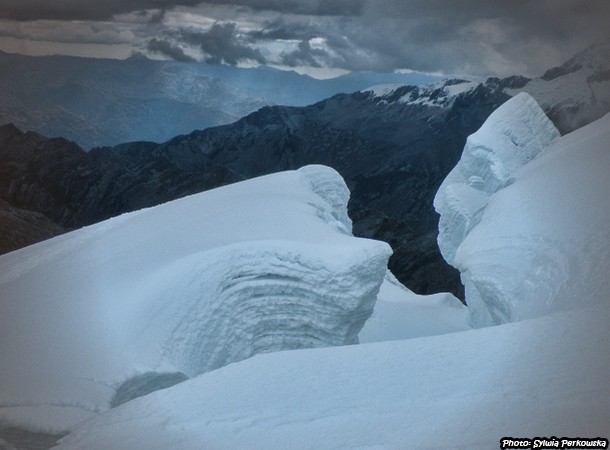 On the way we admire the beauty of the nature, which creates spectacular shapes. Here for example a face of the man. Do you see it? 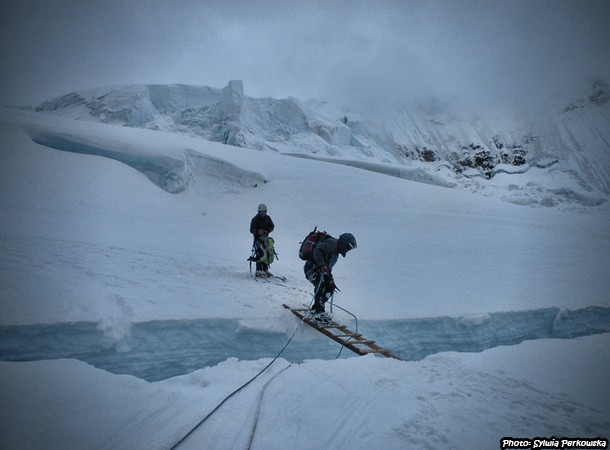 To the second base camp we came back around 3:00 pm. So the climbing part took us around 14 hours.

It was quite late, especially that I wanted to finish the entire trip today. From the second base camp to the first base camp we had around 3 hours. Very fast we packed all our equipment, ate some soup and with the rucksacks on the backs (which seemed to be much heavier than a day before) we started to walk toward first base camp. Fortunately all the time was downhill. The only one problem was the weather, which changed dramatically, started to snow and rain and so was quite dangerous. It was easy to fell down on the rocks, which we had to overcome in first part.

Around 6.30 pm we arrived to the first camp. Our group could relax because they had a night in that place. In contrary me and my friend we decided to come back that day to Huaraz, so there was no time for rest. We had to do another 3 hours of trekking to Pashpa. There was waiting for us a taxi, which took us to the city. To Huaraz we arrived almost at midnight. You will not guess what I did after leaving the taxi. Well I bought triple French fries and coca cola. For sure it was not the healthiest menu, but in that moment I was so hungry and tired, that I did not want to torture me more. So I chose fast food, which I love but in the same time avoid as a fire. Of course after so exhausting adventure I had a great excuse to eat fast food.

It was a really great adventure. Just one important thing: if you do not have serious reasons, definitely do it in 4 days instead of in 3 days. It is possible, but in the same time really hard to finish all the tour in 3 days. For sure for experienced climbers it is not a big deal but for people who do it occasionally yes.

In the article On the way to Yanapaccha summit in Cordillera Blanca you can read and watch some pictures about possibility of climbing Yanapaccha mountain in the region Huaraz. 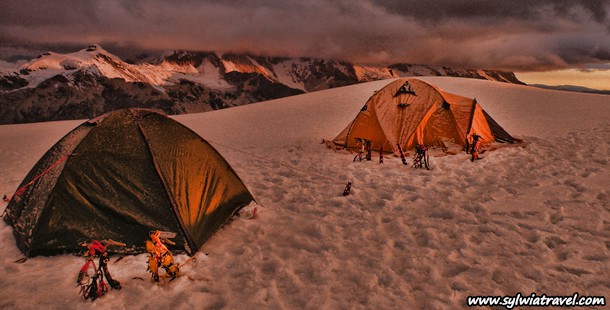 Great report and photos. What type of camera did you use?

Thanks. Usually I do photos and videos with phone cameras and with go pro (different models)

Hi Sylwia! Great post, i want to climb tocllaraju-mountain, do you recomend arrive first to Huaraz and then choose an agency there?, what do you recommend me for acclimatization before? i was considering first do a long trekking for 10 days and then do this summit, but i dont know if this climb is very demanding, thanks for your advices.

yes, definitely you can just come to Huaraz and talk personaly with some agencies and choose the one you trust! This is very important.
I recommend you to check if they have a mountain guides with the certificate!

Hey Sylwia, I am also looking to climb tocllaraju. Would you mind sharing which agency you used in Huaraz for this expedition ?

Unfortunately the agency I took was not so good, I could never recommend it. The name of the agency is Galaxia. I do not know how they are these days, but when I was doing that mountain they did not have good quality equipment (fortunately I had my own staff) as well as they did not have good tour guides – one of them was very good, another one no. I can give you 2 advices: do not choose the cheapes agency to climb mountians in Peru and always check them before you will pay, among others check if they have good quality equipment and if the guides are qualified – if they are official mountaniering tour guides! Still in Peru travel agencies (some of them) cheat people and use the guids who did not finish the study period – what is very dangerous.
I wish you incredible experiences!
Greetings from Peru

Hi Sylvia, did you have your own group of climbers or the agency had an existing group? How quickly were you able to schedule those two climbs? i feel that pricing is much better if you do it in Huaraz (vs emailing ahead of time) but not sure if i have enough time…

Hey Sylwia, you’re awesome! I read the climb you did in Bolivia before this one. I was only thinking about doing the one in Bolivia but I’m interested in this one now as well! If you don’t mind me asking, how much did you pay? Keep up the great blog!

Hello Lisa,
I am happy you got inspired to climb Tocllaraju. It is really great mountain. It is harder than Huayna Potosi, but if you will feel good during climbing Huayna Potosi, you should be ok. Just take at least 1 or 3 days of climbing course – if you do not have it till now. During climbing Tocllaraju you will have to use a lot of times 2 Ice axes, what is not necessary during Huayna Potosi and what makes a difference. You will also have some walls, what does not occurs during climbing Huayna Potosi, and this makes even bigger difference, because you need to use much more effort to go forward.
I paid for my expedition 400 $ and it was special price. I think that in general it is around 600 $, depends on the company. If you have your own equipment, you can always bargain (what I did).
I wish you good luck and a lot of fun :-). I love Huaraz and I hope you will love it too!
Greetings from Cusco!